Its depth was between my shin and thigh at different places as I waded upriver towing my youngest son against a subtle current. The water was clear enough for me to see that its bed was not jagged rocks, but many rounded—large or small, loose or solidly embedded.

I had to check the stability of each foothold before stepping again. The water felt good flowing around my legs. I hadn’t a plan other than to go upstream and float back down with my boy. Wasn’t thinking about how far, just taking step after step, enjoying the moments.

I had marched a couple hundred yards upstream around a bend.

As we floated back down, we exchanged a few words, but not many in total. We mostly just floated and observed and lived in the string of moments.

Landmarks on the bank drifted by slowly, as did plants and rocks that peeked above the calm surface. In some moments, I experienced that delicious illusion that I was resting — stillness — and the fixed objects were moving upstream, past me.

In other moments, bugs skating on the surface confused what was moving and what was fixed.

Sometimes a subconscious sense emerged that the entire surface of the water was flowing along with us. “The” river.

Sometimes noticing the riverbed beneath the water imbued a sense of immutability. This riverbed is always here. As is the water that flows over it, but not exactly. “The river” is a thing, but always in motion. So never really the same. It couldn’t be “the river” without its unmoving bed.

I think this tapestry of experiences might be what mystics mean by nondualism. Stillness perceived only by motion that’s gentle, yet enormous.

Thank you Pat and Alicia, Corrine and Andy, Noah and ” the river”… 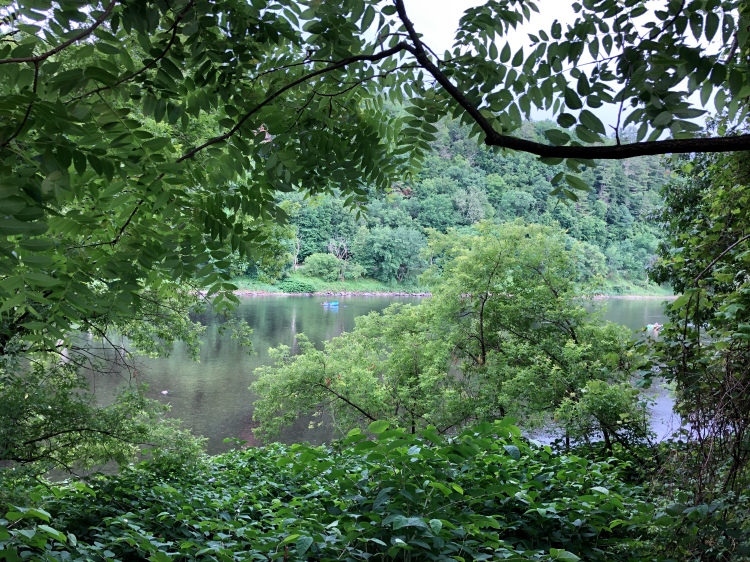 One thought on “The Still River Hike”